ARDEN POINT AND GLENCLYFFE | Having Fun Slipping and Sliding

That pretty much sums up how our Saturday started. When we woke up, the sky was overcast but it had not started to rain yet and as per usual we waited till the last possible second to head out… (not my fault… I swear).

When we arrived, we pulled into the parking lot of the Metro North: Garrison station that sits next to the trail entrance.  Since it was Saturday, we lucked out and didn’t need to pay for parking. Also, by the time we arrived, the weather decided it wanted to cooperate with us and hold off with the rain. Whoo Hoo! 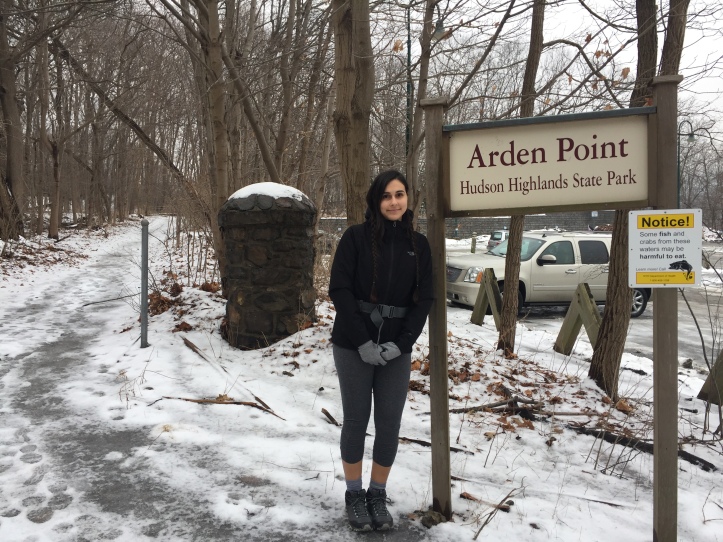 The trail began at the main entrance to the parking lot.  You won’t miss the sign.  Follow the blue markers that lead you down a straight path alongside the train tracks.  You’ll pass a dilapidated building facade and eventually come to a bridge leading over the train-tracks. Now you can choose to cross over the bridge and continue the trails on the other side or proceed straight to what was Marcia’s Mile.  We decided to cross over and check out the other side first.  Being from the city we often forget how sweet and nice New Yorkers can actually be. When we crossed over the bridge, we crossed paths with a lovely elderly gentleman.  Assuming that he could tell that we were a bit indecisive on which direction to head toward, he took a moment to advise us that if we wanted to get a great view of the Hudson River, we should head left and follow the trail with the red markers. 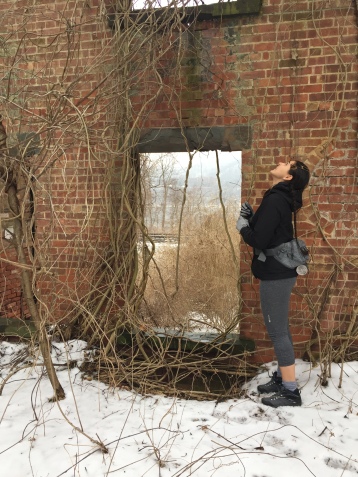 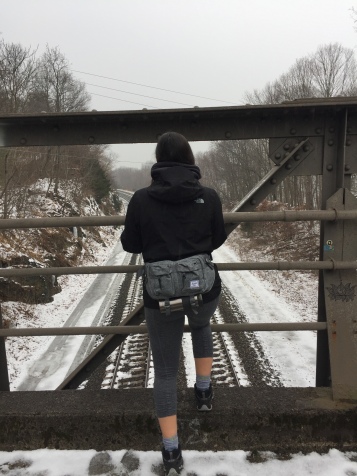 The red marked trail was short, but it indeed led us down to the water where the thawing Hudson left large blocks of ice resting along the shoreline. It was beautiful and we were able to get right up close to the water’s edge. 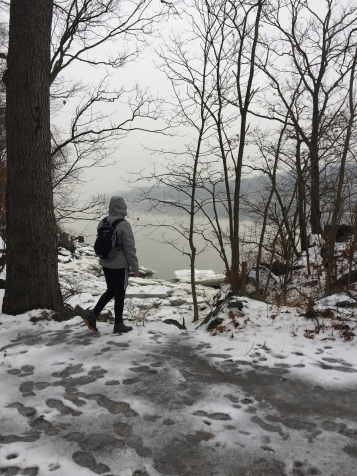 At this point the sky changed its game plan and went from light mist to a drizzle. We threw on our hoods and continued on. We completed the remaining portion of the red trail and found ourselves directly next to the train tracks.

We headed back to the bridge that we had initially crossed and went up Marcia’s Mile. Along Marcia’s Mile we came across a small path heading to a large gazebo. Since the space was so large and there was no one was around, we took this opportunity to dance around 🙂 . We also made sure to take some time to watch the large sheets of ice float down the Hudson.

After we had our fair share of dancing, we headed back to Marcia’s Mile.  This trail was marked by white markers and large crosses scattered along the trail.  We are not easily spooked but we have seen our fair share of horror movies.  So obviously, we walked quickly past them.  Does anyone know why they are there?  Was Marcia a nun? Or is there some other explanation for the crosses?

By the time we reached the end of the mile, the rain had really started coming down. So we backtracked and made our way back to where we parked.  Despite the rain and icy trail conditions we were happy we explored this park.  We’ve even created a Youtube Video of the journey. Be sure to check it out!

Difficulty: 3/10 due to the icy pathway, otherwise a very easy trail.